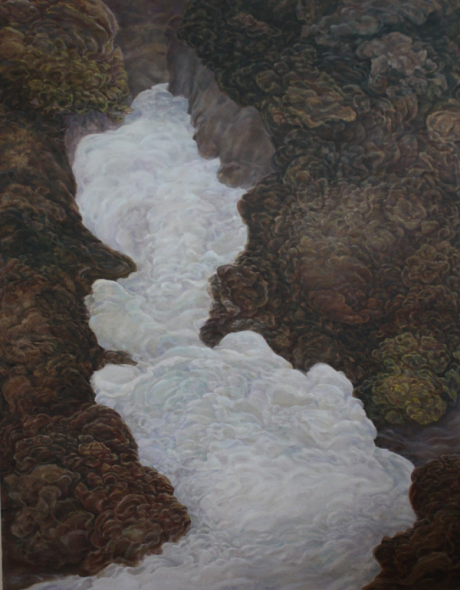 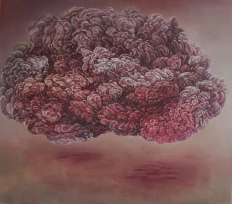 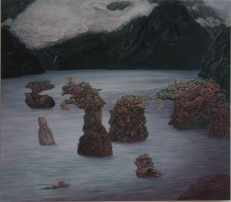 Lola Frost is an artist and scholar living in London. In 2014/15 she was the Leverhulme artist in residence in the Department of War Studies at King’s College London, during which time she exhibited two bodies of work, Taking Risks in October 2014 and Going South in June 2015 in Somerset House East Wing. Since her relocation to the UK in 2003 from South Africa, her painting practice has been focused on developing an alternative model for sublime experience in painting. Her scholarly interests apply to the study of the politics and ethics of aesthetics, and in 2016/17 she will be convening a module on Art, War and International Relations in the Department of War Studies, King’s College London.

If our world, geographically and metaphorically that is, were to be seen as an embodied, three-dimensional and vertical figure, predicated on the co-ordinates of the Mercator map, its’ ‘feet’ would point down south. The sublime terra incognita of such southerliness is of course that oval shaped continent of the Antarctic, separated from our human habitations by the southern oceans, which in turn skirt the tips of the southern continents inhabited by New Zealanders, Australians, South Africans, Chileans and Argentinians and other islanders. It is this ‘skirt of the world’ that this Going South online exhibition, and ongoing project, takes as its starting point, and whose couture is marked as female. The title of this project, Going South, with its colloquial innuendos about transgression and sexuality, opens up to a matrixial method which addresses a psycho-sexual terrain, usually hidden or repressed by those phallocentric interests in which subjectivities are produced through processes of division, hierarchy and disavowal.

Photographs of the lakes, rivers, plains, mountains, rocks, glaciers and ice sheets of this vast terrain are the starting point for a process in which I transform, through the processes of painting, these geological exteriorities into embodied and psychically marked metaphorical interiorities, or life-like, but unspeakable ‘things’. This process extends to the enfolding of other oppositions like part and whole, body and landscape, figure and ground, micro and macro etc. Such oscillating multiplicity, as an aesthetic method, sets up a chain of signification that cannot be represented. This practice then delivers an unfamiliar, even monstrous, version of that unsettling experience we call the sublime. Such Mobian ‘monstrosity’ challenges the phallocentric status quo, even as it invites viewers to enter into an alternative way of being in the world, attuned to infinite loops of interconnection and becoming.

Drawing on the insights of Merleau-Ponty and Kristeva as well as the philosophical tradition of aesthetics, I will explore how aesthetic traversals and attunements inform the paintings of my recent exhibition of paintings, titled Going South, and how the interplay of these oppositions inform artistic creation, aesthetic experience and creative interpretation.

In this paper, I sketch how the feminist and deconstructive ambitions of this body of work are mobilised by the interplay of multiple oppositions which structure the ‘grammar’ of my painting practice: for example traversal/attunement; self/nature; proper/improper, inside/outside, etc. I explore how these oscillating processes, apply to both the creative production and interpretation of this body of work.