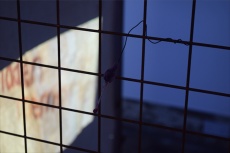 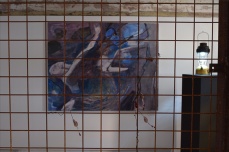 …An unnamed stream runs a mile off the moor – following a line of deep-time seismic fracture in the Lands End granite – until it joins the Atlantic at Porthglaze Cove. On 5th April 2009, a localized storm came in out of nowhere straight off the Atlantic. In the space of two hours, this trickle of a stream swelled into a raging torrent, resulting in the collapse of a bridge and tragic loss of life.

Over the course of this project, I have been looking at how an artist’s practice can work with landscape understood as always being in eventful — and sometimes violently eventful — process, beyond the framed image and beyond fixed framings of cultural landscapes. I have worked with a series of sited interactions: from the deeply dirty materiality of washed out moorland bog to the ghostly traces of geopolitical trauma leaching out through virtual screen-worlds. From bog to screen, I experienced, through the lens of activism, the geo-political events of the summer of 2014 as a cacophony of affective land-water-scapes – in which the mud, rock and storm-swollen trickle in West Cornwall collided with far off children-scaled conflict spun out across beaches, from tunnel to sky. As my work in the studio with the material from my immediate lived landscape became ever more infected by distant trauma, I became interested in how we might account for the unpalatable dimensions of material formations: for dying within living, for exclusions, subjugation, violence, or even extinction. Working with this material has taken me to a place as an artist, where I find that the only way I can work is to directly confront my own sense of affective vulnerability, bodily locating—fleetingly—my subjective voice amidst the hauntings and contagions of image and screen. Art practice, infected by violence and ecological uncertainty, can allow a space to open up in which something else might happen—un-quarantined—beyond frames.

Veronica Vickery is an artist and geographer, based in Cornwall (UK). Her art practice is research-led and tends to unfold between and across processes of painting, making and performance, increasingly mediated through technology. Fractured Earth has developed over the course of a PhD within the geography department at the University of Exeter, UK.  www.veronicavickery.co.uk.